I started writing stories in my early teens, after being inspired by J.R.R Tolkien’s works and thinking how amazing it would be to create something that touched people that way. Influenced by David Eddings, Terry Brooks, Piers Anthony, Terry Goodkind, J.V. Jones, Robert Jordan, and others, I hand-wrote (yes, with a pen and lined notebook paper) my first novel in 1981, and transcribed it using an IBM Selectric II typewriter the next year. That book went on to occupy a box in a dark, inaccessible corner of my home office where no one will ever see it as long as I live. I worked as Co-Editor of The Tempest, the first-ever literary magazine of Lake George Central High School in upstate New York, and won Literary Student of the Year for my graduating class.

When not oppressed by my day job, I write all kinds of stories, and have published fantasy, science fiction, horror, western, crime, and paranormal romance. I am excited to start work on Book Three of the Hell’s Butcher Series this spring! So far. Guilty (Prequel), Hell’s Marshal, and Hell’s Butcher are out, with Hell’s Marshal twice ranking in the top five of western horror on Amazon. My first fantasy novel, Shadow Blade, cam out from Wordfire Press in 2018, and book two in that trilogy is in the works. I did make a brief foray into the world of nonfiction–editing a couple of websites and doing some freelancing–but writing stories is my true passion. 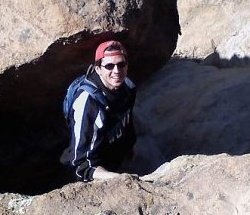 I believe that while storytelling is a talent, the tools and craft of writing well can be taught, making education crucial. Thus, I hold a BGS in English from University of Nebraska at Omaha, and an MFA in Creative Writing, Popular Genre Fiction, from Western State Colorado University. I’m lucky enough to live in the gorgeous state of Colorado with my family, so I get plenty of inspiration from the Rocky Mountains.

Working at a desk, then coming home and writing at another desk, isn’t great for the body. We’re not meant to be sedentary, so I also enjoy mountain biking and Shotokan Karate, both of which keep me active and sometimes find their way into my writing.